Backing up your server and apps

Backing up your server, apps and data is an important concern when administrating a server. This protects you from unexpected events that could happen (server lost in a fire, database corruption, loss of access, server compromised...). The backup policy you will put in place depends of the importance of the services and data hosted. For instance you won't care too much about having backup on a test server, but you will care about having a backup of critical data of your association or company, and having this backup in a different physical place.

Backups in the context of YunoHost

YunoHost comes with a backup system, that allows to backup (and restore) system configurations and data (e.g. mails) and apps if they support it.

You can manage backups either from the command line (yunohost backup --help) or from the web administration (in the Backups section) though some features are not yet available in the webadmin.

The current default method consists in creating a .tar.gz archive containing all relevant files. In the future, YunoHost plans to support Borg which is a more flexible, efficient and powerful solution.

You can easily create backup archives from the webadmin by going in Backups > Local storage and clicking on "New backup". You will then be asked to select which configuration, data and apps you want to backup. 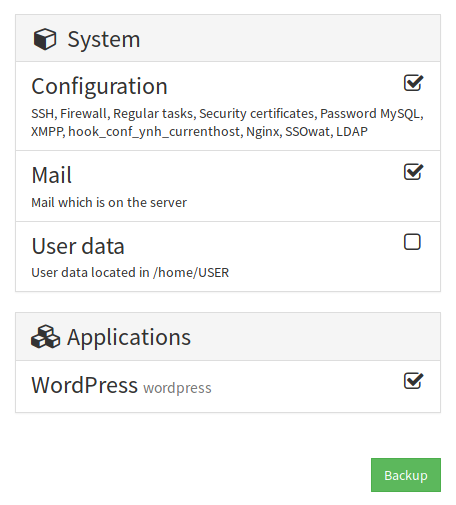 From the command line

You can create a new backup archive with the command line. Here are a few simple example of commands and their corresponding behavior:

For more informations and options about backup creation, consult yunohost backup create --help. You can also list system parts that can be backuped with yunohost hook list backup.

To manually disable the backup of large data, for application that implement that feature, you can set the variable BACKUP_CORE_ONLY. To do so, the variable have to be set before the backup command: sudo BACKUP_CORE_ONLY=1 yunohost backup create --apps nextcloud. Be careful though that mean you will have to backup user data yourself. But doing so, you will be able to do incremental or differential backups of this large amount of data (which is not an option provided by yunohost yet).

After creating backup archives, it is possible to list and inspect them via the corresponding views in the webadmin, or via yunohost backup list and yunohost backup info <archivename> from the command line. By default, backups are stored in /home/yunohost.backup/archives/.

Currently, the most accessible way to download archives is to use the program FileZilla as explained in this page.

Alternatively, a solution can be to install Nextcloud or a similar app and configure it to be able to access files in /home/yunohost.backup/archives/ from a web browser.

One solution consists in using scp (a program based on ssh ) to copy files between two machines via the command line. Hence, from a machine running GNU/Linux, you should be able to run the following to download a specific backup:

Similarly, you can upload a backup from a machine to your server with:

Go in Backup > Local storage and select your archive. You can then select which items you want to restore, then click on 'Restore'. 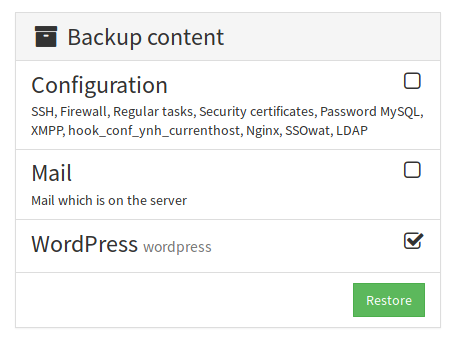 From the command line

To restore an app, the domain on which it was installed should already be configured (or you need to restore the corresponding system configuration). You also cannot restore an app which is already installed... which means that to restore an old version of an app, you must first uninstall it.

Restoring during the postinstall

One specific feature is the ability to restore a full archive instead of the postinstall step. This makes it useful when you want to reinstall a system entirely from an existing backup. To be able to do this, you will need to upload the archive on the server and place it in /home/yunohost.backup/archives. Then, instead of yunohost tools postinstall you can run:

Note: If your archive isn't in /home/yunohost.backup/archives, you can create the directory, move the archive into it, and restore it like this:

Storing backups on a different drive

If you want, you can connect and mount an external drive to store backup archives on it (among other things). For this, plug in the drive and make sure that next time it is mounted automatically, by following the instruction at Adding an external storage to your server.

Then, move the existing archives and then add a symbolic link.

You can add a simple cron job to trigger automatic backups regularly. For instance, to backup your wordpress weekly, create a file /etc/cron.weekly/backup-wordpress with the following content:

then make it executable:

Be careful what you backup exactly and when: you don't want to end up with your whole disk space saturated because you backuped 30 GB of data every day.

Backing your server on a remote server

You can follow this tutorial on the forum to setup Borg between two servers: https://forum.yunohost.org/t/how-to-backup-your-yunohost-server-on-another-server/3153

Avoiding the backup of some folders

If needed, you can specify that some /home/user folders are left out of the yunohost backup command, by creating a blank file named .nobackup in them.

For ARM boards: full backup with USBimager or dd

If you are using an ARM board, another method for doing a full backup can be to create an image of the SD card.

This can be done easily using USBimager (N.B. be sure to get the Read-Write version! Not the write-only version!). The process is basically the reverse of flashing the SD card.

More details in the USBimager doc

Alternatively you can use dd if you're comfortable with the command line with something like:

(replace /dev/mmcblk0 with the actual device of your SD card)